The liver is an important organ in the abdomen that detoxifies the blood coming from the digestive tract, metabolises drugs and makes proteins. Liver tumours can arise from the liver itself (primary liver cancer) or as spread from a cancer in another organ (secondary liver cancer). Traditionally, tumours in the liver have been treated by surgery or chemotherapy, with radiation therapy playing a minor role. This is because normal liver cells are relatively sensitive to radiation damage, which limits how much radiation can be delivered to liver tumours. In addition, the lack of precise radiotherapy delivery techniques in the past meant that there would be large amounts of normal liver treated together with the tumor, further increasing the extent of radiation damage.

Stereotactic Body Radiation Therapy (SBRT) refers to an advanced form of external beam radiotherapy. A specialised co-ordinate system allows multiple, sharply focussed x-ray beams to hit small targets in the body. This not only allows liver tumors to be treated with great precision (therefore minimizing collateral damage), but also allows the delivery of high doses of radiation to a target within the body in either one or up to five treatment sessions. With such technology, this non-invasive method of delivering radiotherapy is now recognized as one of the options for treating liver tumours. SBRT can be employed to treat both primary and secondary liver tumours, especially those deemed not suitable for surgical removal.

What are the special features of the SBRT technique that make this possible?

The liver, and therefore any tumour within it, tends to move as the patient breathes. The SBRT technique involves measures to limit movement, observe and account for it, and this way it is ensured that the tumour is fully treated while minimizing the amount of normal tissue irradiated. 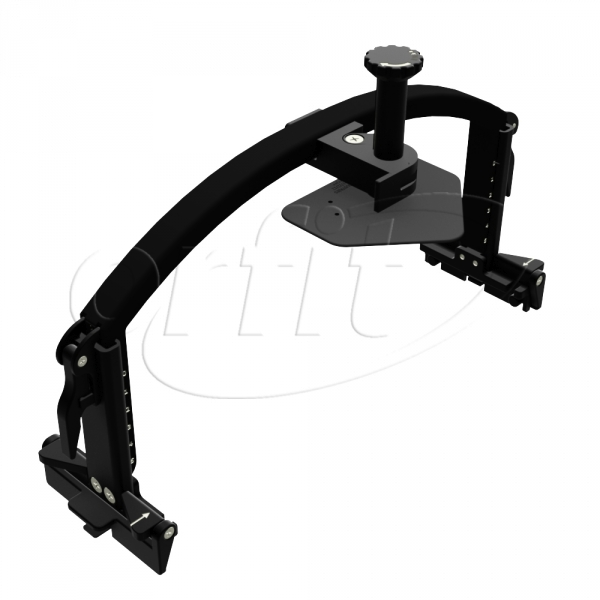 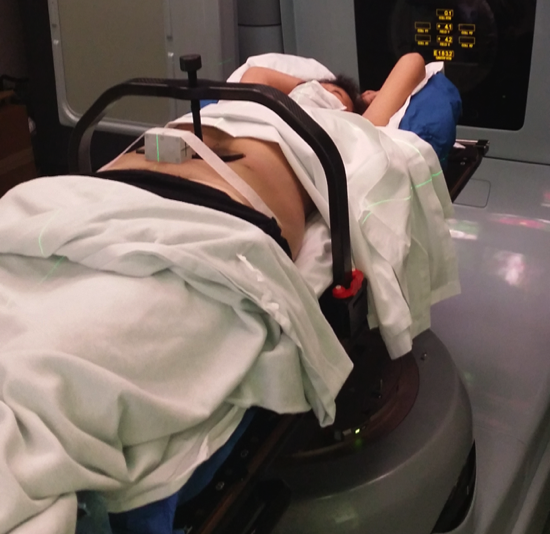 Picture of an abdominal compression device consisting of frame and adjustable metal plate (left) and the device in place on a patient being treated with liver SBRT (right).

4D-CT Simulation scan to observe movement of the liver. The CT simulation scan serves as a map of the tumour and organs in the area being treated. The images acquired allow the radiation oncologist to make a plan to best treat the tumour without overdosing the nearby organs. The 4D-CT is a special CT simulation scan that not only accounts for the tumour and nearby organs in 3-dimensional space, but also the fourth dimension, time. The position of the tumour will be captured “live”, as the patient breathes in and out, through multiple sets of images that will then be sorted according to the phases of respiration. With this, the radiation oncologist will be able to map out all possible locations of the mobile tumor and direct the radiotherapy doses to cover those areas. This ensures greater accuracy in tumor targeting and minimizes the chances of missing a moving target. 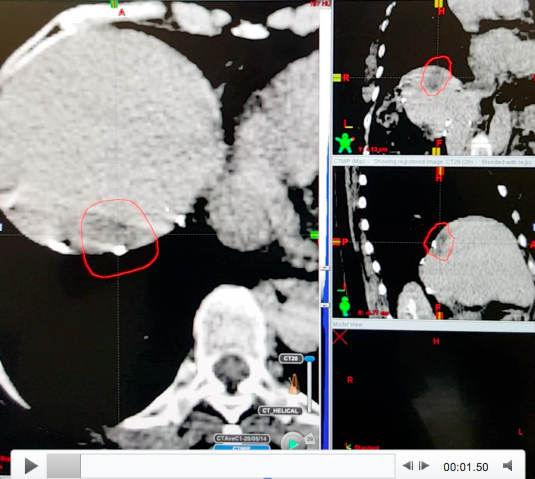 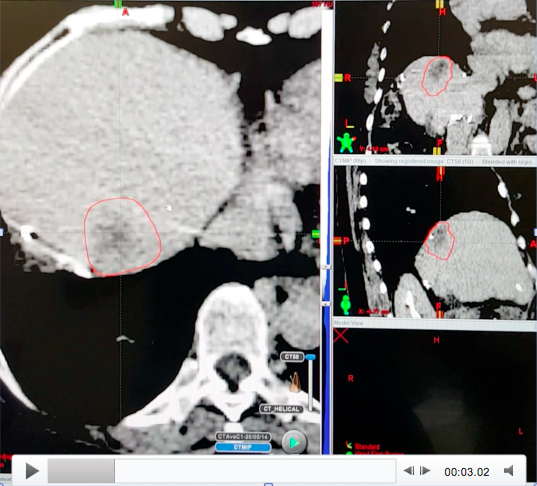 4DCT images showing a contour/map (red line) of the possible locations of the liver tumor which appears in this case in a darker shade relative to the surrounding bright grey normal liver. These images demonstrate how the contour covers the position of the liver tumor both when the patient breathes in and the liver is pushed down (left image) and breathes out ie liver moves upwards (right image).

Respiratory gated delivery of radiotherapy. Respiratory gating refers to delivery of radiotherapy only during a particular phase of respiration. This works well in patients who can hold their breath for a period of time. A breathing device called a spirometer is linked to the CT simulator and treatment unit. It can relate in real time tumour position and phase of respiration.

With the images from the 4D-CT, the radiation oncologist will plan the treatment such that the radiation beam fires only when the tumour is in a certain position e.g when the patient is in full inspiration or expiration. This can significantly reduce the exposure of normal liver tissue and other organs to radiation. At treatment, the machine will turn the beam on or off as and when the patient holds his breath or continues breathing. 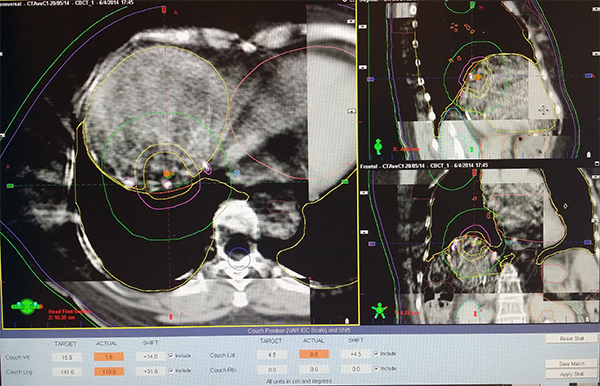 Picture of pre-treatment scan performed with patient on couch to ensure the liver, tumor, and surrounding organs are matched to the same position as the planning scan. The initial planning scan is displayed on the bottom left and top right of the movable checkerboard display while the pre-treatment scan is shown in the other 2 segments.

Rapid delivery of radiotherapy. The radiation beam is delivered using Volumetric Arc Therapy (VMAT). This highly conformal, powerful x-ray beam is swept around the patient, into the liver tumour, without interruption. This fast delivery of radiation reduces the treatment time of respiratory gated treatment. 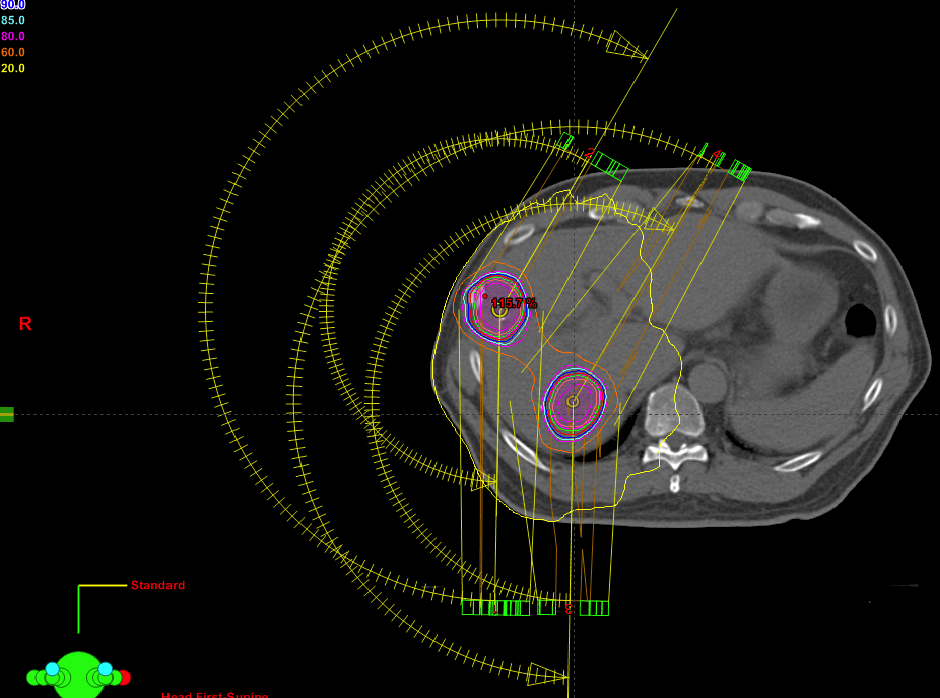 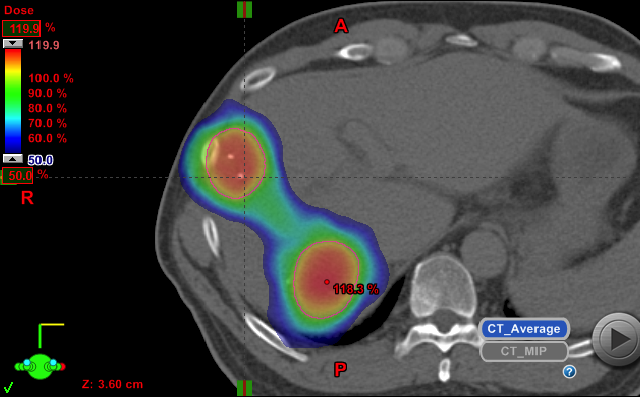 Example of a treatment plan using VMAT to target 2 tumors in the liver. In this challenging case, 4 arcs were used to achieve a highly conformal dose coverage around both tumors. Each arc takes less than 1-2 minutes for delivery.

What are the results of SBRT to the liver?

Results of SBRT in treating both primary and secondary liver tumours are promising, showing better results in controlling these tumours compared to historical conventional radiation therapy given daily over few weeks. One study* of 102 patients with hepatocellular carcinoma (HCC), the most common primary liver cancer, showed that at 1-year post SBRT, 87% of patients still had the tumour under control. Of note, more than half of these patients had tumour within the large veins of the liver, which often limits effective treatment options. For secondary liver tumours, the possibility of local control with SBRT is also excellent at 70-100% at 1 year and 60-90% at 2 years.**

What are the side effects of SBRT to the liver?

The early side effects of SBRT to the liver include fatigue, nausea (rarely vomiting) and mild skin changes. These are temporary and resolve within a month of radiation therapy. The normal liver cells can be damaged by radiotherapy, with the effects seen only a few weeks after SBRT. With attention to technique in avoiding as much normal liver as possible, this usually shows up as mild to moderate abnormalities in the liver blood tests without any symptoms. The blood tests tend to normalise with time. For patients with underlying unhealthy liver, there is a higher risk of having radiation-induced liver disease that is severe enough to cause liver failure. Patient selection is therefore very important

How can I know if I will benefit from SBRT to the liver?

SBRT to the liver is not for all patients with liver tumours. Sometimes surgery or chemotherapy may be more suitable. Even when radiotherapy is the preferred option, the tumor may be too close to critical organs or the liver too unhealthy for high dose SBRT to be performed, in which case lower doses of conventional radiotherapy may have to be used. It is therefore vital that all patients considering liver SBRT be assessed by a radiation oncologist with experience and expertise in liver SBRT, before embarking on this advanced treatment. 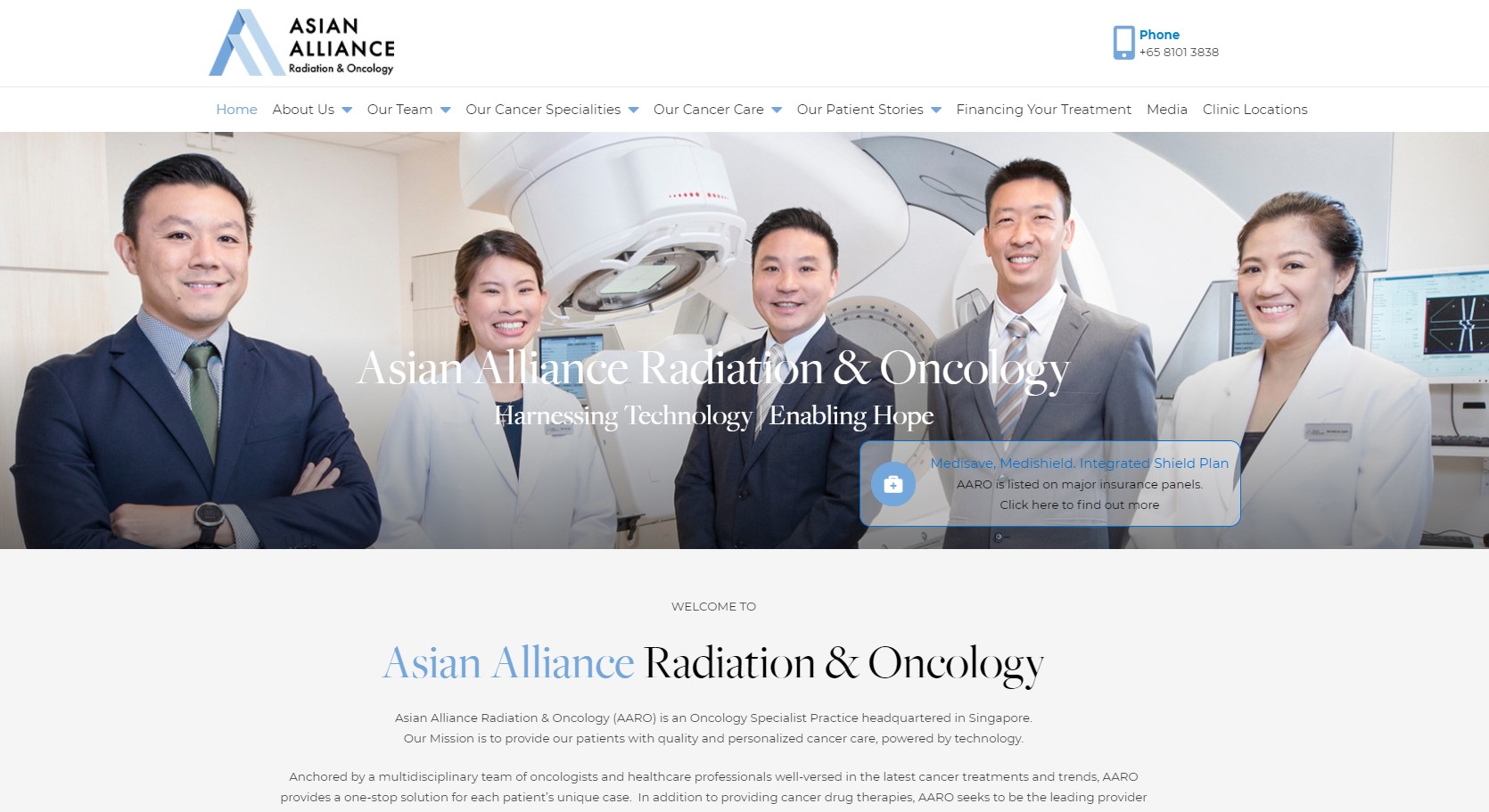